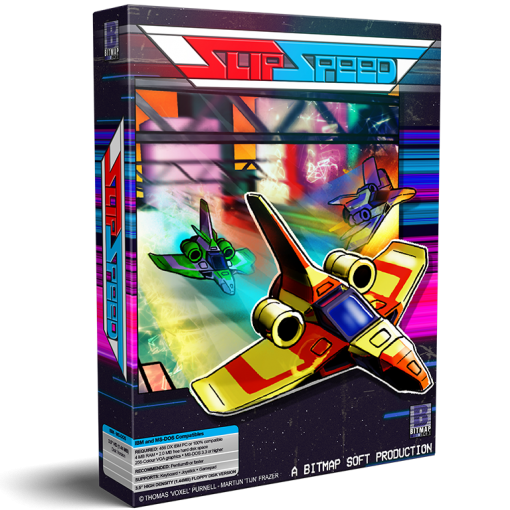 Last year we covered the first DOS Games Jam, a fun event that resulted in over 100 new games being submitted, all of them either inspired by, or running on actual MS-DOS.

One of the submitted games is SlipSpeed, a top-down pod racing game featuring ship upgrades, track shortcuts and much more! The game requires at least a 486 and runs in both MS-DOS as well as Windows 95.

SlipSpeed was developed by DOS Game Club member "voxel", who you might know from Episode #40, about Nomad. The music to this game was composed by none other than your own DOS Game Club host Martijn ("Tijn" on the forums).

Shortly after the jam was concluded, voxel was approached by Bitmap Soft in the UK, who were interested in giving SlipSpeed a boxed copy release. Since we received an extra copy, we're giving it away to you!

If you want to win a copy of SlipSpeed Deluxe Collectors Edition, all you have to do is leave a review of DOS Game Club somewhere and share the link with us by mailing it to club@dosgameclub.com. You can leave the review where ever you want, for example Apple Podcasts, Facebook, Reddit, your own blog, whatever. As long as you can share your review with us, it's good. We love to hear what you think!

The winner will be chosen randomly from all entries by next month, so if you want to have a chance, better get on it right away!

< Next: Interview with David Fox --- Prev: Master of Magic >